I tend to lag in technology, often years behind the rest of the civilized world. I never claimed to be tech-savvy or even civilized, okay?

Truth is I only got a “smart phone” this year for lack of choices. I went kicking and screaming into the “smart” realm with no intention of using it for more than basics. 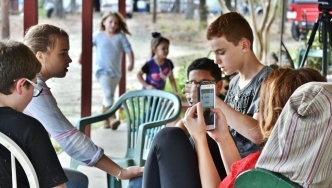 After a few months [eight really] I installed the Facebook app. Apparently you need a second app for Messenger so I hit the okay/install that too button.

So there I was creeping Facebook on my desktop, minding my own business while the app did its thing and suddenly I am bombarded with alarms. The phone started chiming erratically,  messages were rolling in with GIFs and crazy stickers and emoji’s. At the same time my cousin is texting me, asking if I just sent her something.

No! Oh hell, this demon possessed phone has a mind of its own!

To make a long [list of deleting apps] story short… My daughter explained the particularly bothersome app; how Messenger notifies your Facebook contacts with a suggestion to wave/interact.

Well I waved bye to most of the apps and went back to using the phone as a paperweight.

I understand now why people are glued to their devices. Bless their hearts, I’m just not that good at being smart.