Yesterday’s Free-for-all was kind of a Freaky Friday, let’s call today’s Sneaky Saturday. As in sneak a peak at Chapter 14 from book 3 in the Clan Destiny series, Unjustified Favor. If you’re not already familiar with these cooky characters well… that’s a shame.

It was midnight before the van pulled up at the estate, and just as Tallulah had said, there were two huge iron letters hanging at the entrance, LE. The landscape looked much as it did when Maggie had left it in the dead of night years ago. She could see the Spanish moss blowing silently in the breeze while the ancient oaks that gave it refuge stood silent and proud.

The entire house was lit except for the master bedroom. She felt sure the suite had intentionally been left dark. In the moons glow she could see through the rails of the balcony into her old boudoir, but only lines and shadows.

She fully expected to have anxiety when she arrived but oddly enough, she did not. She could recall the beating and the humiliation with barely a rise in her heart rate. She could remember her stillborn son without an overwhelming sorrow. Linda watched her closely, snooping just at the edge of her sister’s emotions. At the first sign of stress they would head into town and get a room. But Maggie was calm, eerily calm.

“Are you okay sweetie?” Larry whispered as he took Maggie’s hand.

“I’m fine.” She smiled, pulling his hand to her face.

The children had slept for the last four hours of the trip and when Mary put the van in park it roused them.

“I’ll bet we’ve got a bunch of wet bottoms.” Maggie said as she lifted Lawren from the seat.

“Yeah, we should change the babies. The men can unload the luggage.” Linda added.

“You men heard that didn’t you? “ Levi asked as he stepped out and stretched, “Be sure and get everything, me and Boy are gonna take a walk and stretch our legs.”

“You can do that after you get all of our things unloaded.” Mary told him.

“I thought that’s why Steve and Larry came along – to do the heavy lifting.” He joked.

“I don’t mind getting it Levi; you go ahead and walk your dog.” Steve offered.

“Don’t suck up to that old fart Steve. Make him get it his self.” Larry teased, heaving bags from the rear.

“You hush! Let that boy suck up if he wants to.”

“Don’t say it!” Linda yelled from the doorway, “Don’t you dare say it Steven!” The three men laughed as each one threw a tote over their shoulder and grabbed a suitcase on wheels and followed the women to the front door.

“Lawdy lawd, I’m glad y’all finally made it. Hallelujah. Now get on in here and make yo selves at home.” Tallulah said hugging each one as they entered. “Mercy me look at all them babies. They is some perty babies too, ever last one of `em. And they all look like their mama’s – not that you daddy’s is ugly- you was prob’ly perty when you was a baby.” The heavy woman chuckled slapping her hands against her thick thighs.

When Maggie started with the introductions the old nursemaid politely stopped her.  “I know who everyone is.” She smiled, pointing at each individual as she called them by name. “And you all just call me Tallulah.”

“Alright, Tallulah can you show us to our quarters? These young uns’ need some dry britches.” Steve said, attempting a more southern drawl. His effort went unnoticed.

The exterior had not changed much but the interior of the historic mansion bore only a slight resemblance to the stuffy manor that Maggie recalled. The looming portraits of the Lafont’s were gone along with the heavy drapery. Linda and her mother kept a mental finger on the former debutante’s cerebral pulse as the group ascended the staircase. The flickering images became more pronounced when they reached the landing across from the master suite.

“Why do you have a padlock on the door?” Maggie asked, wrestling with the memories, the taste of soap and blood in her mouth, her head bouncing off the door facing and then the marble sink, her pulverized reflection in the mirror. Linda felt her siblings anxiety and a strong desire to react until she heard her mother’s reprimanding.

Wait! Let Maggie deal with this. Tallulah looked to the crowd, her joyful face suddenly solemn and at a loss for words. Mary nodded to her and the hostess cleared her throat and announced,

“I keeps the ghosts in there. I know walls don’t mean nothin’ and neither do that lock – but it makes me feel better and lets `em know I mean business.”

“I knew this was a bad idea.” Levi said, holding Adam’s head to his shoulder, “You boys load the van and we’ll drive on into town. There’s three rooms waiting for us at the-”

“No!” Maggie interrupted. “I’m staying. If you’re scared you can go ahead and leave but I’m not.”

“Are you sure Magpie?” her father asked, “Bad memories are one thing but ghosts… well I don’t know much about ghosts.”

“They ain’t gonna come outta that room. I done told `em this is my house now and they works for me.” Tallulah said, planting her hands on her hips and rocking her head.

“I don’t believe in ghosts.” Larry interjected, “There is no evidence to support that theory.”

“I believe in ghosts.” Steve confessed.

“Then I guess I’m the only logical person here.” Larry sighed, “Show us to our rooms Tallulah and put an end to this madness before it turns into an argument and my daughter gets diaper rash.”

Maggie grinned and when the convoy started down the wide hallway, lagging behind she whispered toward the door, “I won worm dirt! Take that!” 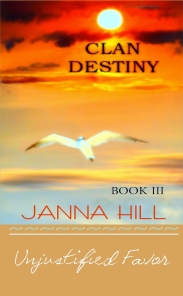 I’ve been told parts of this book are frightening by a few that claim not to believe in the supernatural. Well, I believe and you know what? I ain’t afraid of no ghost.