Okay, I might have been wrong in yesterdays post. We received [well] over 13 downloads of Getting Me Back. Thanks y’all. It wouldn’t matter if we got 13 million – we are sticking to the plan. We bought the ticket – we’ll take the ride. That’s my spin on a Hunter S. Thompson quote. 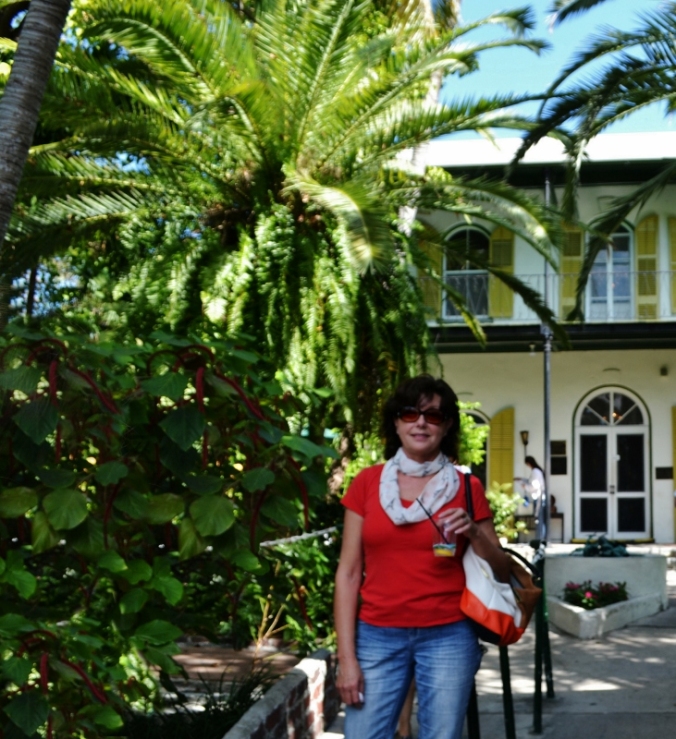 This photo was taken in front of Hemingway’s house in Key West, Florida. Of course it is now a museum. I look like I am either drunk or crying. I think it was both. Talking to ghosts sometimes has that effect on me.

Did you shake his hand –?

the hand of a man’s man?

Did you see how his eyes searched the space around him as the world grew smaller?

Did you learn the secrets of Africa or discuss his tomes over drinks?

You could not for we were mere children –

our wedding day marking the twenty second anniversary of his exodus… his rise to immortality.

He won the Nobel Prize for Literature the year you were born – did you know that?

I was but two months in the womb when he placed the beloved twelve-gauge inside his mouth and obliterated the ciphering pheasants once and for all.

Did you see how he caressed her?

How her cold, soft metal against his finger was as pacifying as the perfect daiquiri… how she (his beloved) alas cured him of the demons.

In a flash she rooted them loose one by one from their hiding place – a place liquor nor currents could mole; a cavern so deep no joule or watt could grasp. Ahh, but she did.

She exorcized them, set them to flight riding on soft grey tissue laden with hemochromatosis and fragments of bone.

A sacrifice for the Bay of Pigs?

It was all such folly — such unholy madness for a simple man and a literary saint.

So Getting Me Back (The Voices Within) will still be FREE April 18th through the 21st while we do this A Poem & A Picture by Me & of Me.

What else can I say about Ernest Hemingway that has not already been [acceptably] said?