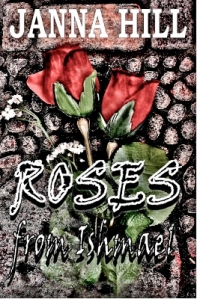 Here’s a morsel of Roses from Ishmael, a snack of a story you can read on a potty break, yeah it’s that short. There are links below if it appeals to you.

…Ishmael yanked the eighteen pack of Bud Light from the counter and strolled to his truck.

Just outside of the city limits he reached across the seat and twisted the first cap off of a tepid bottle. The clanking of the glass was comforting and the warm beer eased the queasiness in his stomach. He downshifted and let the black Chevy pull itself along the narrow country lane as he sipped the Bud and drank in the scenery.

The summer heat had taken a toll on the coastal Bermuda that waved its browned tops as he drove past. Ishmael nodded and gestured back, feeling a kinship. But relief was on the way, the weatherman said as much when he interrupted the radio host to announce tornado warnings in effect until eight o’clock this evening.

As he pulled into the drive he sucked the last bit of suds from the third bottle, took a deep breath and sighed. Her car was parked in the usual place. He felt hopeful, nervously adjusting the flowers and dusting the fallen petals to the floorboard before popping a wintergreen disc into his mouth.

The mint clung to his cheek like paste as he gagged, the stench of evergreen causing him to heave with panic. A mouth full of juniper berries was an unpleasant memory to say the least. His tongue darted and swept in search of spit and after several sweeps he managed to be rid of it. When the candy landed Ishmael kicked at the dusty drive covering it and his boot in a fine white powder.

“Honey I’m home.” He called from the kitchen. “Arianna? Sweetheart? Are you still here?” he spoke gently as he made is way toward the guest bedroom.

The squishing of his boots on wet carpet went unnoticed as did her silent cries. “You’re in there aren’t you?” He asked pressing his hand to the door. “Speak to me, please?” Ishmael ran his fingers across the buckled paint and continued, “Ari- I’m sorry…

Get the rest of the story [free for realz] at these stores.

Tell Amazon about a lower price here (where Roses from Ismael is .99 ¢ because I’m not exclusive. Well you know, I ain’t married to none of `em. ) Just scroll down on the left and share a free link. Thanks.

And yesterday was the summer solstice (aka 1st day of summer) so HaPpY summer y’all!