This week’s photo challenge foreign fits right in to my current thought process, as in foreign language. As I mentioned in a recent post I speak Hick and a little French. My grasp of foreign languages is limited; thank goodness my imagination is not.

I sometimes watch Spanish television. No, I do not speak Spanish – that may be why I find it so entertaining. I like to guess at what they’re saying. My husband enjoys certain Latin channels because they show cleavage and midgets. I don’t know what it is about that combination but it humors him and he laughs at the plump jolly man dancing to La Cucaracha.

I try to discern what they are saying, I don’t want to fluently comprehend – that would take the fun out of my guessing game. Husband doesn’t even try to guess, his thoughts are, “They’ve got boobs, little people, a happy fat man dancing and a song about a cockroach – who cares what they are saying.” 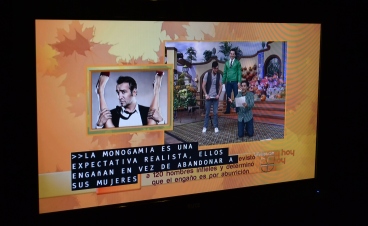 This snapshot came from a program I was watching this morning. I gather the conversation had something to do with men cheating on women or leaving them and monogamy being a realistic expectation.

I’m guessing that to some monogamy is a foreign concept.