This week’s photo challenge is titled Illumination. While looking around for a shot that aligned with the challenge (defined as light, brightness, radiance, brilliance, clarification or enlightenment etc…) I came across a souvenir from the Ringling Bros. and Barnum & Bailey Circus. It’s a softball sized globe that sits atop a stick and reminds me of the Reunion Tower in Dallas, except the souvenir spins a lot faster. Maybe that’s exactly what it’s supposed to be; heck I don’t know I stole it from a grandchild just found it lying around. Anyway, you press a button and this gadget puts on a fascinating little light show which by the way reminds me of an enlightening story my grandmother once told me about her trip to the circus.

First allow me to shed some light on my grandmother. She was a tad peculiar by some standards. Correction she was outright odd, offbeat and utterly deranged at times. I loved her dearly but come on, who in their right mind tries to gnaw the head off of a screaming gray squirrel? In her defense I must say the rodent did bite first – she merely wanted to teach him a lesson. She was a tough cookie who didn’t take guff from any creature and as hard as she was there beat a tender childlike heart within her bosom.

I wish I had been there under the big top when my uncle took her along with his family to see the circus when it came to town. I know she was mesmerized by all of the excitement; the delight was still in her voice as she recounted the day’s events.  She laughed about the trained elephants and giggled at the silly clowns, held her breath when reminiscing about the trapeze artists and shook her head and shuddered in disbelief when it came to the high line exhibition. “It was the darndest thing you ever did see Jennavenay.” That’s what she called me. Not because she couldn’t enunciate Janna René, she preferred Jennavenay and that is all she ever called me. I asked her once if she knew my name, she pronounced it plainly and just as plainly added, “I don’t like it. I call you Jennavenay and you answer to it-that’s good enough.” And I suppose it was.

It took a moment or a few chuckles before it occurred to me she had a tooth missing from her upper denture. “What happened to your tooth Grandma?” I asked. “Spot light did it.” She said matter of factly.

“Oh my goodness, someone hit you with a spotlight?”

“No silly girl” she says, “They had beams of light like magic shooting all over the place and one come right across my face and knocked my tooth out.”

“I don’t think that’s possible.” I replied with all due respect but my doubt alone ruffled her feathers. I should have heeded uncles warning when I saw him shaking his head in the background but it was too late and Granny was on a tear. She’d heard they had “lasers that could burn holes plum through metal and doctors were usin’ `em to cut folks open for surgery. It shouldn’t surprise anybody that if one hit you just right it could knock a tooth out by golly!” I seceded with a modest “I suppose stranger things have happened.” Besides, how could one argue with such clarifying logic especially with a woman who would go tooth to tooth with a wild squirrel? 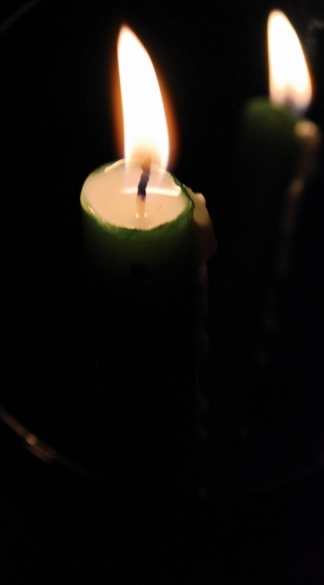 A radiant flame and its image.

The tiny light that guides us so we don’t pee on the floor in the middle of the night.

A possible replica of the illuminated demon that took Grandma’s tooth.