I learned something new today. What I have always called a Chameleon is actually an Anole. Ah-know-lee, it sounds very French, doesn’t it? [Well kick me runnin’ I happen to know a little French] 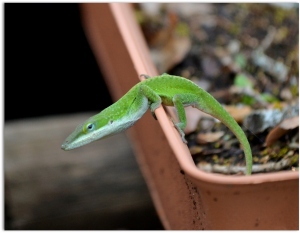 Fact: They change colors like the Chameleon but are more closely related to the Iguana. Très el strange`o as hell I know. I also know they consume pesky little insects but I did not know that Anoles eat snails! That definitely sounds French.

The Anole and I have a lot in common. Okay maybe just a couple of things because I’m not eating a damn snail- not willingly anyway. Well maybe if it were fried and crispy… or pureed and stirred into a fruit smoothie. Oops I just puked a little. Sorry. I’m sure the French word for puke would probably sound less vulgar. Heck if they can get people to devour something so slimy and creepy by calling it escargot surely they have an elegant word for puke.

Around here we’ll leave the eating of invertebrates to the Anole. The truth is the only thing we have in common is that we are both native Texans scrounging in the same box of dirt.