“All eyes were on Wall Street, but truth be told, the market crash paled in comparison to the Navarro County drought.” 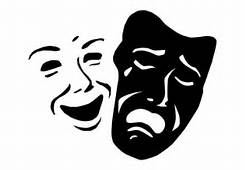 The news of Black Tuesday came and went as little more than dry morsels between flapjacks and red-eyed gravy. Black Thursday was no different. Margin calls and ticker-talk; it was all a foreign language to the average man of Navarro county. New York, Chicago and any place not adjacent to the dying province could have just as well been another country – another planet.
<>Suicides headlined newspapers across the globe. Although desperate men (and women) chose gas or bullets; poison or tablets to avoid poverty the stories of men leaping from windows sold more papers and it seemed to pacify the masses, at least for a while.
<>The headlines went on and on. Tales of a brutal bearish market where stock prices were plummeting and fortunes were being dissolved. The days grew long and the soup lines grew longer as billions of dollars were lost, except for the sparse crowd who knew how to short the market and profit from despair.

<>The caste system was readjusting; the prudent wealthy settled into middle-class; the so called middle-class went back to being poor and the poor resorted to begging or starving. Even the outcasts felt the impact. Amidst all of the chaos and realigning there was one morphological thing that everyone understood; a fact that every race, creed, class and religion agreed upon – the roaring twenties had come to a crashing halt. Literally.

A somnolent bedraggled man stood in the doorway of Crom’s Cafe and eyed the headline of the Navarro County Herald. He thoughtlessly tapped his hat against his thigh to loosen the grit before tossing a nickel into the box that read COFFEE & TOAST 5¢. There were a dozen nickels alongside his.

<>“Thanks Bell” he grumbled to the portly matron behind the paper as he filed past the register and took a seat in the back of the diner.
Half a dozen men sat scattered about the dimly lit eatery, each one scarcely aware of the others presence. They all sat in the same fashion; silent with their elbows on the table and their heads bowed over crumbs and half empty cups. One man’s groans interrupted the silence, erupting between broken verses of prayer which quickly evaporated without regard.
<>“Here you go Liam.” Bell spoke just above a whisper as she sat the mug and saucer on the table, “If there’s anything left after breakfast I’ll send it home with you.”
<>“Thank you ma’am but that fella over there looks a heap worse than any of us.” he nodded toward the sniveling man, “Looks like he might need any scraps you can spare.”
<>“Tut-tut!” Bell shot a glance at the praying man and shook her head, “Don’t you know who that is? That is Daniel D. Starnes; the same Daniel Starnes who owns the cotton gin over at Mexia; the same scoundrel that cheated fifty men out of their wages. I know he makes a sorrowful spectacle with all that praying but do you know what he’s praying for?” the woman paused long enough to fill her lungs and did not wait for Liam to respond. “The beast! Yep, he is praying that the stock market will recover so he doesn’t lose any more money on his investments. I tell you I am at my wits end with all the moaning and groaning and killing over filthy lucre and that blasted stock market! ” Bell wiped her hands on her apron and marched toward the kitchen speaking so the entire café could hear her, “Money! That is all some folks care about.”
<>Money can’t buy you rain, Liam thought, as he quietly dipped his dry toast into the weak coffee and watched as the diner filled.
<>The usual crowd shuffled in, in their habitual manner. More coffee was poured into waiting mugs, more nickels dropped into the box, a few at the bar ordered a real breakfast and those who could afford to buy a copy unfurled their paper. Liam inconspicuously glanced at the man’s next to him. The dismal headline meant nothing to most tenant farmers. It meant even less to Liam Weir. He saw it as one less gluttonous banker and they could not die fast enough to suit him.
And greedy cotton ginners can go to hell right along with `em. 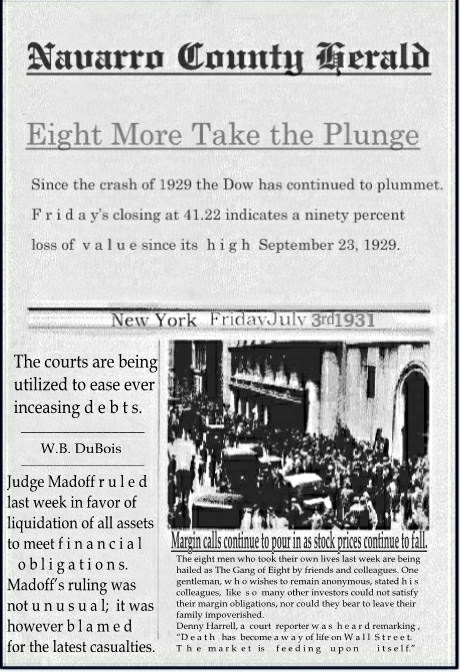 <>If I had five cents to spend, I wouldn’t waste it on that rag. They just as well call it the New Yorker! Liam decided he had seen enough of the Navarro County Herald. There was no mention of the drought, not on the front page anyway. When the man beside him turned the page, Liam went back to watching the idle patrons throughout the diner.
From his seat in the rear he could see the entire café and a portion of the adjoining store, the same store he was determined to visit and purchase a decent bill of groceries before the day was up.
<>Liam studied the room; watched as men felt blindly for cups and sopped dry biscuits in air while soaking up the news of investors going broke. All eyes were on Wall Street but truth be told, the market crash paled in comparison to the Navarro county drought.
<>He watched as a billion dust particles danced overhead, swaying recklessly in rays of smoke stained sunshine until the weight of grease and nicotine and worry forced them to settle. The grimy mist settled on everything – on everyone. It covered every field cap and fedora. Without prejudice it landed on burnt necks and white collars alike and no one, other than Liam appeared to notice. He listened to the moans and grunts that followed each turning page. Some lingered on the specifics, others on the gruesome photographs but at the end of breakfast they all shrugged their shoulders and went back to waiting.

Get the rest of the story @ your favorite e-book store.

Hey!
If you tell 2 friends…
and they tell two friends…