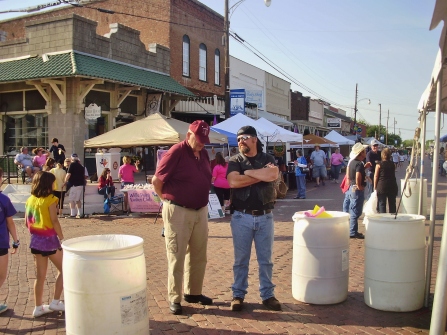 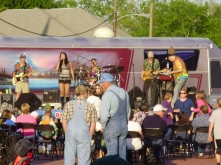 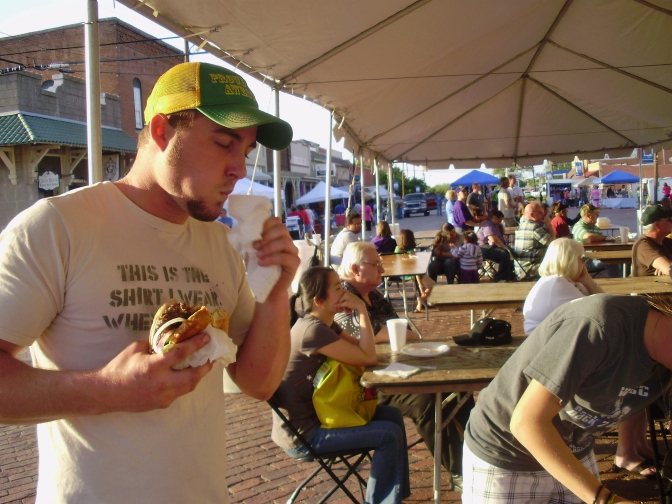 Breaking for a Burger

These urban snapshots are from the 2011 Bluebird Festival which is an annual celebration held in Wills Point Texas. It is a pretty big event for a population of less than four thousand. Every April for nearly twenty years now the town center is corridored off so that visitors can mosey along the red brick streets without having to watch for cars, unless they’re looking for the antique car show. Colorful tents line the boulevards with out of town/out of state vendors displaying their wares. Music bounces through the air mixing with the carnival screams one block over and every so often the church bell across town chimes in. The chattering ranges from friendly banter to crops and gossip until a hideous horn warns the crowd to hold that thought. For a moment all that can be heard is a rhythmic clanking of metal against metal. Soon the sound fades and the merriment resumes. The sweet smell of cotton candy sends small eyes searching for its origin while others seek out the delicious fatty flavors of what is considered real food. It’s a people watcher’s paradise and a lemonade stand is never far away.

Wills Point is the official Bluebird Capital of Texas and the proclaimed Gateway to Lake Tawakoni. It is located in Van Zandt County which is the bona fide Gateway to East Texas. We like gateways and wear those titles proudly.